Just because they are bathing in cash, doesn’t mean that some celebrities don’t know how to live frugal lifestyles! Here are just some celebrities who made our list – trust me, we were as surprised as you to discover the big names on budgets! 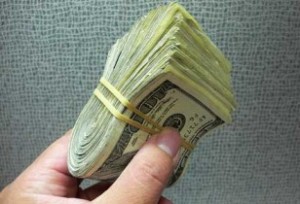 Despite Tyra Banks being worth 75 million dollars, she still knows that money doesn’t grow on trees (or rather that one day it may not) and therefore needs to budget accordingly. She is known for asking her accountant “Can I afford this?” before making any big purchases (to which her accountant obviously laughs about!) It was reported that when she moved into her new offices for hit TV show ‘America’s Next Top Model’ she despised the carpets but thought it would be too expensive to change. Instead, she painted the walls a bright colour to draw attention away from the carpet and straight to the walls – if that’s not frugal thinking then I don’t know what is! She also collects soaps and shampoos from her countless hotel trips which means she saves trips to the supermarket and is the ‘queen of leftovers’ – she will never throw out food if she can eat it the next day!

Jay Leno didn’t always have money rolling in like he does now – it is that ‘coming from nothing’ background that his kept him grounded and sensible with money. He has said that he puts all of the money he makes from his hit show “The Tonight Show” into savings and only spends what he earns through extra comedy gigs. Leno is known for having excellent work ethic and always had 2 jobs growing up. He may be bringing in the big bucks now but his lifestyle is still relatively frugal in comparison to his celebrity friends!

As if we could love her more! The hilarious actress tries to focus on ‘making money instead of spending it.’ She is as down to earth with her approach to her millions as she is to everything else (so it seems!) She is unaffected by the ‘Hollywood lifestyle’ that so many actors and actresses seem to live – she does her own thing and is not afraid to do a bit of coupon cutting if it means she’ll get a discount at the supermarket! She still lives in the same apartment that she did before she ‘made it big’ and is embarrassed to spend money on unnecessary items

So there you have it! Our favourite celebs who are proving that just because they are making millions, doesn’t mean that they have to go crazy with their spending habits. They have the Frugal Ladies tick of approval!

Jess hails from Sunny Australia and is the youngest of the frugal ladies. She loves shopping for a bargain, reading, watching movies and spends most of her life on the beach
@allthefrugalladies
Previous Spring Break Without Breaking the Bank
Next Make Money Online with Paid Surveys

What You Should Consider Before Moving to Utah

Giving Thanks: How Gratitude Benefits out Lives

3 Budget-Friendly Crafts You Can Do with a Sewing Machine

Love sewing but don’t have the time? All these sewing projects below can be finished in 30 minutes or less - and on a budget!